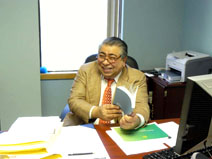 Rohit Sabharwal grew up in New Dehli, India, where he attended Saint Columba’s High School. Rohit scored in the top 50 of approximately 20,000 on the Cambridge University High School exam given throughout the British Commonwealth. He remained in New Delhi during college, graduating from Saint Stephen’s with First Class Honors.

Rohit moved to the United States to attend the University of Pennsylvania Law School and then Wharton School of Business, graduating, with both a Law Degree and an MBA in 1987.

He began his career working, as an investment banker, at Marine Midland Bank (now HSBC). He moved on to practice law at David Bradley Law, and from there, to Kelley Drye in Los Angeles. In 1994, he joined Reid and Priest, in NY, as a partner.

In 1996 he left Reid and Priest to form his own practice, and was later joined by Julie and Stan, forming SGL.

He is an avid Bridge enthusiast and has won many tournaments; and enjoys Golf, though he admits that his Golf score is higher than his IQ. 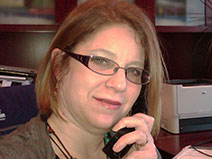 In 1991 Julie Globus graduated with honors from Skidmore College with a BA in Government and Philosophy which she completed in 3 years. Following graduation, Julie accepted a grant to attend The Hebrew University of Jerusalem on Mount Scopus in Israel for one year. While she did not speak the language when she left for Israel, at the end of the year Julie was offered a scholarship towards completion of her MA, which in 1995 she earned with honors in Political Theory, studying mainly in Hebrew. Julie returned to the US to earn her law degree from Rutgers Law School in Newark and give birth to her first son, who managed to sit through the better part of two years of law school with her.

In 1998, Julie returned to Israel, two children in tow, to practice as a foreign legal consultant. While there she studied towards a certification as a Trustee in Bankruptcy under Israeli Law; and spent time in London on behalf of some of her clients. In 2001, Julie returned to the US to join Mandel, Katz, Manna and Brosnan (n/k/a Mandel, Katz and Brosnan) as an associate. She joined Rohit Sabharwal as a named partner in 2004, and closed her firm’s first trade, three months later,  Blackberry and cell phone in hand during the delivery of her youngest child.

Julie is an Associate Member of the Association of Certified Fraud Examiners. Her focus is on all aspects of financial fraud, embezzlement, misrepresentation and the corporate culture related to fraud. In the context of her established information wall and compliance practice, Julie has expanded to assist her clients with building an architectural framework for compliance with State and Federal securities and finance laws, and in establishing strong internal controls. This expansion of her practice is a natural marriage of Julie’s love of numbers and spreadsheets and her keen ability to identify breaks in patterns.

In addition, to her love for her family and practicing law, Julie is intent upon saving the world one person at a time and one business at a time. In this effort, Julie, like her partners, commits a significant amount of time to pro-bono work, now an integral part of SGL’s practice. She uses her education, personal knowledge and life experiences to assist her pro-bono clients in avoiding numerous pitfalls, both related to her usual practice, and also focusing on other areas like Wills, Trusts and Estates and not-for-profit law.

Julie is the mother of three amazing children. Her eldest son is a computer genius, who by his own right, is soon to become a formidable member of the business world. Her daughter is graduating from high school and will be pursuing a career in acting and modeling for which she has a lifelong passion. Her youngest son is now in his final year of elementary school; and when he is not in school is bouldering, climbing, swinging from bars and jumping obstacles in a parkour and climbing gym.

When not working and parenting, Julie is an avid cyclist and triathlete with three ½ IronMan races under her belt. She trains regularly, is captain of the Expresso bike group at the nearby JCC and strives to complete at least 3 ½ IronMan races per year. 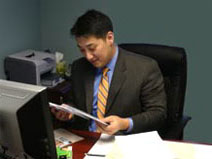 Stan Lim attended NYU, where he majored in economics and minored in sociology. While attending NYU, he was Captain of the Varsity Swim Team and a two-time contender for the Korean Olympic Team. He graduated from Pace University School of Law, where he was Vice President of the Asian American Law Students Association.

Upon graduating from Pace University School of Law, Stan, in his extremely practical manner, worked for the law firms of Gibson, Dunn & Crutcher LLP and then at Weil, Gotshal & Manges LLP.

Stan then went client-side to JPMorgan Chase Bank, N.A. where he spent 6 years as Vice President, manager, and counsel for the secondary loan trading group. Stan managed the distressed documentation team, representing all areas of the bank in preparing legal reviews, documentation and attending to other corporate legal matters. He left JPMorgan Chase Bank, N.A., to join Rohit and Julie.

Stan would like to thank his wife for dressing him or we wouldn’t be able to display his photo, above. 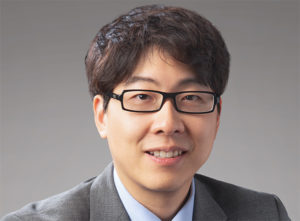 Jongbum Nam was born and raised in South Korea. Prior to, during and after his law school years, he worked on various immigration matters including National Interest Waivers (NIW), inadmissibility waivers (both non-immigrant and immigrant), investor/intracompany transferee visas, as well as family-based immigration petitions. Currently, he serves as a full-time member at SN Law Firm in Seoul, South Korea, overseeing both U.S. and Korea inbound/outbound work, and serve as our point of contact in South Korea. 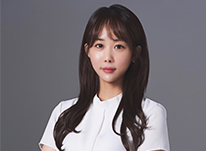 Yeonhee Goo focuses her practice on banking, compliance, and immigration matters. She is also an Associate in Law Firm SN located in Seoul South Korea, where she handles immigration and other transactional matters.

She attended Fordham School of Law, where she majored in Corporate Compliance. Upon graduating from Fordham Law School, Yeonhee joined an international law firm based in New Jersey. She also worked for Woori America Bank located in New York City. During her employment at Woori America Bank, she gained extensive practical experience in finance law and internal audit processes.

Before Fordham, she also majored in Private Law from Kookmin University School of Law in Seoul, South Korea. She is a native Korean speaker and fluent in English.